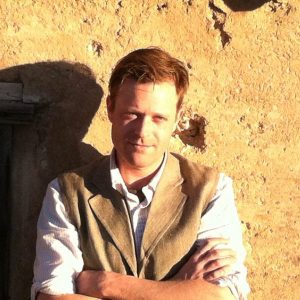 Austin Smith, one of our newest fellows, was featured on NPR’s Here & Now segment November 1st. The interview focused on his newest book of poetry Flyover Country. Austin’s poems challenge misconceptions about the Midwest and what he calls the “carelessness” of drone warfare. Austin discusses Flyover Country with Here & Now host, Jeremy Hobson. Listen to the pair discuss the Midwest, the environment, and Austin’s poetry here for the full interview.

Some days even nature seems sinister.
Walking around the farm with a beer,
Seeking some solace after the evening news,
You meet the cat you love coming back
From the windbreak, a rare songbird
In his mouth. In the mulberry branches
The silkworms writhe in nests that, backlit
By twilight, look like X-rays of lungs.
In the pasture the cow kicks at her calf
And won’t let her nurse, while in a seam
Of gleaming honey in the oak that lightning
Cleaved the queen daintily eats her offspring.
In the rafters of the barn the starlings are
Pushing the owls’ eggs out of the nest,
While the owl herself is out hunting.
Going in, you nearly step on a swarm
Of ants ravishing a butterfly like pirates
Tearing a capsized ship down, its wings
Like torn sails, and the first thing you hear
When you enter the kitchen is the snap
Of the mousetrap you set this morning,
Tired of being kept awake all night
By their scratching in the walls. And so
You are met with your own small act
Of cruelty, your contribution to the whole.
With a pair of pliers that are themselves
Always biting something, you take
The broke-necked mouse by the tail
And throw it into the darkening yard,
Never knowing that in favor of it the cat
Let go of the bird, who was only stunned,
And whose song you woke to this morning. In these poems, midwestern barns and farmhouses are linked to other lands and times as if by psychic tunnels. A poem about a barn cat moving her kittens in the night because they have been discovered by a group of boys resonates with a poem about the house in Amsterdam where Anne Frank and her family hid from the Nazis. A poem beginning with a boy on a farmhouse porch idly swatting flies ends with the image of people fleeing before a drone strike. A poem about a barbwire fence suggests, if only metaphorically, the debate over immigration and borders. Though at times a dark book, the collection closes with a poem titled “The Light at the End,” suggesting the possibility of redemption and forgiveness.

Defined as:
To make a sustained deep
Murmuring, humming, or buzzing
Sound; to talk in a persistently dull
Or monotonous tone; to live
In idleness like a drone
Bee (the male of the honeybee
That develops from an unfertilized egg,
Is larger and stouter than the worker,
Lacks a sting, takes no part in honey-gathering
Or care of the hive, is of use
To the colony only if a virgin queen
Requires insemination); to pass or proceed
In a dull, drowsy, or uneventful manner;
To utter or pronounce with a drone;
To pass or spend in idleness or in dull
Or monotonous activity; an unmanned
Aircraft or ship that is guided remotely.
Rhymes with:
Zone,
Phone,
Hone,
Shown,
Lone,
Flown
Blown,
Stone,
Bone,
Moan,
Sewn,
Prone
Condone,
Unknown,
Atone.