Black Earth Institute is based at Brigit Rest, a farm in southwestern Wisconsin. Fellows gather for retreats every fall.

The 22-acre farm called Brigit Rest, after the Celtic goddess/Christian saint, is located in Wisconsin’s Driftless area, so called because the last four glacial periods did not affect the region. The topography is dramatically different than the rest of the Midwest, representing an island of much older land in the plains.

Brigit Rest is near the ancient Indian trail between the Four Lakes (Madison) area and Blue Mounds, then to the mining area near Mineral Point and down to the Mississippi. The trail may have been used by Mound Builder peoples as long ago as one thousand years. During the Black Hawk war in 1832, after Black Hawk’s partial victory at the battle of Wisconsin Heights 10 miles to the north, the Iowa militia marched through. Army records that describe the intersection warn against descending down into the ravines due to the dangers of brambles and rattlesnakes. The old road still exists on the property, cutting through a circle of trees that represents the Celtic tree alphabet.

To the south, Blue Mounds can be seen clearly. In legends of the Hotcak (Ho-chunk) Nation, Blue Mounds was called Wihagadja or “the place of the second born daughter.” It is said that Earthmaker sat on a rock outcropping and looked over the land. When the Hotcak Nation lived in and around Blue Mounds, Earthmaker’s smoke would lie horizontally if he were happy and rise straight up if he were not. Now the blue haze only rises straight up.

In addition to the Celtic Tree Circle, several other areas for meditation and creativity exist on the land. A grove of pines (the “Pine Chapel”) provides shade all year round as well as coolness in the summer. At the base of the hill below the house, a massive hickory tree spills its nuts every fall; documents tell of this hickory tree being a destination in the 19th century for nut gatherers, while beside it is a 100-year-old tree that provides apples for cider. Further down the hillside is the largest white oak tree in the township, perhaps in the county. An old wildling apple growing beside a sinuous “snake” of a horizontal root of a large poplar that has been dubbed “Eve’s Bower” and is a fine place for hiding away. A large black walnut grove provides more nuts each fall as well as dappled shade through the summer; wind chimes hung there make a “Wind Chamber” that is one of the camping areas on the land.  Relatively flat trails lead through the woods, and several other camping areas offer privacy and an opportunity to wake up in nature.

Nearer the house, large organic vegetable beds provide much of the household’s food.  A vineyard can produce several varieties of wine.  The orchard provides apples, pears, peaches and cherries; the garden has raspberries and blueberries as well as the vegetables.  Beside the house, a small waterfall and pond and a fire circle provide a location for outdoor meetings and enjoyment. 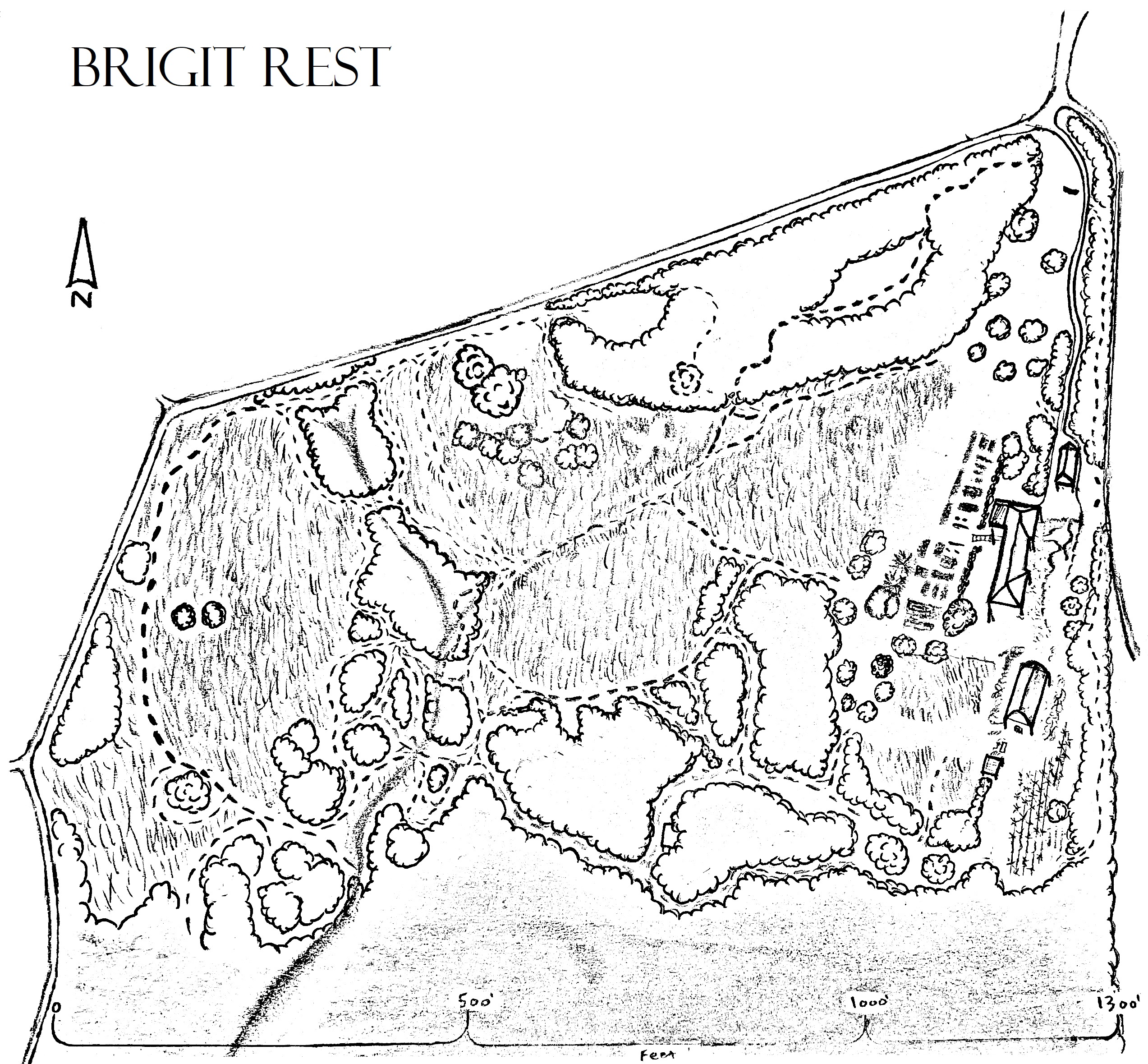 Two ancient oaks, with oaks that have grown in since Brigit Rest was established. Surrounded by remnants of a prairie.
Garden Each letter of the pre-roman Ogham Celtic alphabet has a corresponding tree. For each of the sixteen trees in the circle a mini poster is attached explaining the mythology, ancient views, and beliefs of the tree.
Brigit Rest Sign and Oak Apple tree, likely more than one hundred years old, still bears fruit each season. The painting, by Fiona Marron, now hung in the house at Brigit’s Rest, was used by Annie Finch for the cover of an earlier issue of About Place journal.
Brigit's Well An artesian spring that is now Brigit’s Well. Reminding us of an ancient, 3000 year old Brigit’s well in Ireland.
Wind Chamber Patricia designed a ‘wind chamber’ in the midst of a black walnut grove, with hanging chimes that can be heard across the land.
Fellows' Maples Trees planted as each of the fellows complete their terms. Pictured are the two planted by the very first group of two fellows.
Patricia, Mother, Father Trees View South from atop a Shagbark Hickory

View South from atop a Shagbark Hickory

View West of Brigit’s Cross Across Valley from Garden View West of Brigit’s Cross Across Valley from Garden

View of Wildflowers on Hillside from Trail

View of Wildflowers on Hillside from Trail

View South from the limit of Brigit Rest View South from the limit of Brigit Rest

Spring thaw and the creek flows. Down at the bottom of Brigit Rest you can see the end of a concrete abutment where the old road was.
View South down Trail towards the House View South down Trail towards the House

Black Earth Institute is aptly named. Our annual meetings at paradisaical Brigit Rest in Black Earth, Wisconsin provide rich soil for germination and cross-pollination of ideas that bring together the arts, social justice, and ecology. When the Fellows and Scholars of the Institute return to their dynamic and varied work all over the world, their thinking has been stimulated and enriched. Throughout the year Black Earth panels come together, co-operative projects between Fellows flourish, and all of us feel more hopeful and less isolated. As a novelist and the director of a small not-for-profit center, I feel encouraged by my deeply rooted connection with a like-minded and yet astonishingly diverse community.