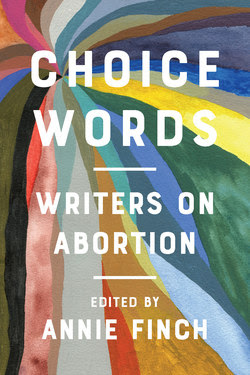 “If we called abortion ‘miscarriage,’ or maybe ‘optional miscarriage,’ would it be more beautiful?” —Nicole Walker

Safe abortion should be an option available to all women, but as they are in the search for legitimate providers, many people declare the fetus to already be a human, to already possess a soul. We hear those debates all the time from the pro-life movement decades after Roe v. Wade made abortions legal. “Choice Words, Writers on Abortion” edited by Annie Finch, offers a space for women and their artwork inspired by the topic of abortion. It’s so easy to absorb the heartache and grief of their words that it feels like reading this anthology is a form of solidarity. Digesting new information about abortion is expected. I was intrigued to learn in Katha Politt’s foreword that in the United States alone, women who are mothers make up sixty percent of women who obtain abortions.

For women who were not openly provided sex education, it’s common not to use or know how to use contraceptives. A story that stands out is “Cold Cuts and Conceptions” by Julia Conrad, where the narrator has a supportive family where abortion is seen as a family tradition. Unfortunately, couples who want children also have abortions due to pregnancy complications. In a collection of tweets via the Twitter account, @HomeRather, a couple travels from Belfast, Northern Ireland to Liverpool to abort a fetus that would otherwise be born dead. At that time, abortion was not legal in Northern Ireland.

My favorite piece in this anthology is “Prayer to the Spirit” by Starhawk. A short prayer inspired a reflection: is an abortion simply a closed door to a spirit (the fetus) sending it off to another woman who desires to be a mother? This reminded me of how my mother told me years ago that she attempted to conceive for almost two years before I came along. Perhaps my spirit was rejected by women who chose not to be mothers until I went to the right person?

Having a safe abortion is a blessing for women who see it as an act of self-love. Gwendolyn Brooks wrote her poem “the mother” which portrays women as artists and their fetuses as unfinished creations. If anything, I invite supporters of the pro-life movement to read so they can see the harm they bring and how much it contradicts their idea of life. I found a quote that shares my anger in Cin Salach’s poem, “You are here,… This is America, if you can’t stand the freedom/ get out of the country.” How much hate do people have for women that they don’t think they should be allowed to make decisions on their own bodies? For women who have experienced an abortion, this anthology may comfort you and bring you some healing. May it remind you that you have the freedom of choice and that your body and your words belong to you.

Angelica Flores is a Mexican-American writer and Dominican University graduate. She enjoys working on English-Spanish translations and has created the Southwest Nest Series for the online arts publication, Sixty Inches From Center. She also writes for The Gate Newspaper, where she has reviewed books, films, and theater performances. She works for the Poetry Foundation and is the owner of the blog, The Macaron Raccoon.