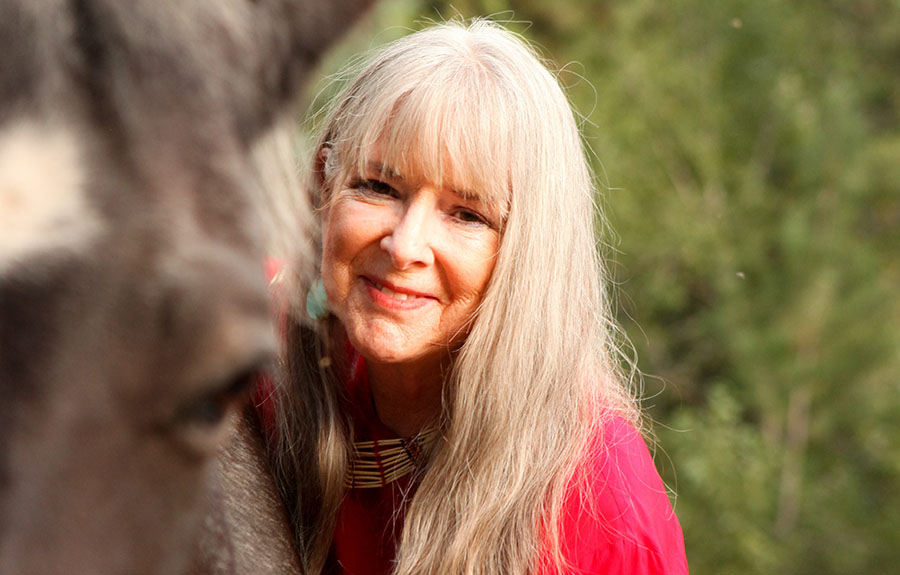 This excerpt from The Radiant Lives of Animals was originally published on YesMagazine.org.
An Indigenous writer describes how ritual is the entryway to connection and wholeness.

In The Radiant Lives of Animals, celebrated Chickasaw writer Linda Hogan draws on ancient stories and traditions to consider the connection among human consciousness, the natural world, and spirituality.

All of these thoughts come to me around the word enchantment, a word rich and complex in meaning. This word holds great meaning, resonance, and depth. My thoughts are like the root meaning of the word. They are about a state of being but also recall the roots, to chant and to sing. Encant. Encantare. A story. A great poem: canto.

In our own tribal nation, the Chicaza, few of us hold to the oldest of ways. Reasons exist for this lack of knowledge from the past. For one thing, we are among the earliest survivors. We are descendants of the first almost colonized people when de Soto arrived on the East Coast in 1551. However, since that time, we have had many countries and religious groups bending our history, creating warfare against us, manipulating our world. Because of all this, so few ancestors had the chance of surviving unless they finally took on the ways of intruders. Colonized by many, we were still forcibly moved from our homelands to Indian Territory (Oklahoma). Through all of this, it was nearly impossible to keep our original knowledge, our first instructions from creation, our ceremonies, and our treaties with the Earth and her other than human inhabitants.

My other family is Oglala Lakota. They still hold the remnants of traditional ways, but in a different sense than what I am considering here. Some have become Catholic. Some practice traditional ways. Some do both. Unlike these nations, Navajo still largely hold to the ceremonial complex called Chantways, a sacred system of myth, prayer, song, and extraordinary sand paintings, medicinal plants, and more, all connected. This elegant, intricate system is most often used for healing people, or for restoring a person to a place of emotional health. It is an old way, and now many different practitioners may have only a single role in performing one long song, prayer, or other part of the ceremony, each of which is the recitation of something very ancient, complex, yet recalled for a community or for a single person.

These ceremonies are created in many ways, yet most are designed to bring a person and community into balance; hozho is the word meaning wholeness and harmony within their place, first within that community, then with the physical environment around them, the spiritual environment, expanding all the way out to the universe. It is an elaborate system of relationships, with a mere human standing in place within the greater entirety.

From the first creators, from mythic creation and the world’s early inhabitants, and with the inclusion of sacred lands, animals, and plants of the mountain-bounded world, the remembered words and songs carry harmony to a restored world.

This re-creation takes place through language and image, songs and prayers, through the speaking of a people’s original knowledge. It is akin to the power of enchantment, an intelligent word that holds all stories spoken. It holds the spirit close in a state of awe and wonder. This realm dwells in the heart of each small human. It lives at our soul depths. But first we learn to become conscious of the smallness of our human self and the greatness of the world around us. This consciousness appears in a moment caught within our full beauty.

One spring, many years ago, I went to the deer dance of the Yaqui in Arizona. This dance is a ceremony passed down from ancient and unmeasured time. In daylight was the singing and much more that, as an outsider, I would not know. Dancing took place in the church courtyard, with women dressed in black and mourning.

Everywhere in the desert realm were evergreen sprigs. Clowns appeared. The day passed with much activity and, even as an observer, I felt its profundity. I didn’t want to leave. I didn’t want to walk away from something so clearly meaningful, and so remained late. Late into the night, one man danced tirelessly and without end, wearing white buckskin and the head of a deer above his human head, with flowers and evergreen in his antlers. Firelight, or moonlight, shone on his skin. Singing took place as he danced himself out of one world and into another, a state of what The People call true enchantment. Later I read that it was a song cycle; it begins in the enchanted mountain forest with the story of a young deer or fawn coming out of the mountain evergreen trees with spring flowers in its antlers, as it is written in one of many books:

This is only one version of the beginning, and it’s important for us to note that the mountains are still the center of the Yaqui world, even though the people were pushed by the Spanish into the desert. Again, the realm of cantos, stories, songs, and dance returns a people to the past, and the past to the present. To the people a sense of wholeness begins with that first hypnotic passage and moves to some parts of life before invasion, from inside the first world.

Reading the songs of different deer dance singers, all speak of the world of story, and how song and dance are a part of enchantment, bringing the human into a more-than-human realm, a consciousness too rarely beholding the world. Beholding is the correct word because this dance and the days around it derive from seeing the world with deep human awe.

From the roots of enchantment, something of our lives in their broken parts come together to make for wholeness. Wholeness. Completeness. It begins with something as ancient as that memory of the young deer coming from the forest with spring flowers entangled in its antlers.

Excerpted from The Radiant Lives of Animals by Linda Hogan (Beacon Press, 2020). Reprinted with permission from Beacon Press.