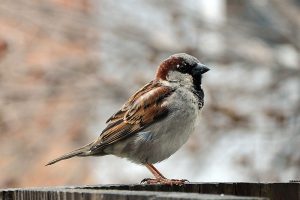 The traffic had been slow all day but by four pm, it was reduced to a trickle. Those cars that passed him on the street did so in two and threes as if they were sticking together for safety like lumbering animals caught out in a storm. It was, in fact, a very harsh winter day. The afternoon temperatures dipped well below zero: one of the coldest days ever recorded in Chicago. The only sounds now were from an occasional plane passing overhead, and from distant cackling from those venturesome neighbors who had left snug homes to experience the cold. He could hear the sound of his feet crunching through the snow.

The husband and wife had left the house to drop off a bag of groceries to a nearby homeless shelter. Peanut butter, cans of peaches, mandarin oranges in a light syrup, crackers, nuts, and so on: things that people accumulate in abundance for emergencies that rarely materialize. He stepped out of the car to drop off the goods, and walked down the short flight of stairs into a reception area in the basement of the church. The volunteer welcomed him with gusto; she had said “Welcome”, rather grandly, and looked at him expectantly. She seemed confused when he extended his shopping bag. “Donations,” he said. “Ah…!” she replied as she realized that he would not be staying. Another volunteer elaborately produced a receipt and he was required to jot down the list of items he was leaving behind. He found that he could not remember all the items, and made a few of them up.

As he left the shelter, he suppressed a smile and once back in the car he and his wife laughed at the confusion as she drove them away. It seemed like the sort of thing that always happened to him. The sort of thing that would also happen to his father, he reflected. After a few minutes, they fell silent, both ruminating, no doubt, on those now suffering without shelter. The husband abruptly declared he wanted to walk home and got out of the car. “I am looking more and more like my father,” thought the husband. The wife drove on.

Before he exited the car, he had protested when his wife had fussed over his clothing. He was however grateful for the extra scarf and the hand warmers after a few minutes outside. I must mention how grateful I am, he thought. Perhaps he had made too much of a fuss before leaving the car. She dropped him off near a beach. It was astonishingly cold. I will try to get close to the water’s edge, he thought, so I can listen in on the lake. Perhaps the ice will be moaning. The thought pleased him, but as he walked towards where he thought the snow ended and the lake began, he became less certain that this would be sufficiently obvious. I might fall through the ice. Again, he thought of his father. “I’d like to live as long as he has”, he thought. He had no plans for being buried in the Midwest, no matter how long he had lived there. Assuming, he thought gloomily, that they would recover his body. But, of course, they would. Once the ice thawed he would be there lolling about in the shallow waves. A truly ridiculous death. He shuddered.

Despite his inclination to stay outside for a long time, he realized that this weather was unrelenting. Even the most tenacious flesh must yield to it. So he turned for home, having accomplished nothing. What am I even doing outside, he wondered.

The route home was quiet. The cars slipped away. He paused to let a man walking his dog pass by—the animal stopped and gave him a querulous look, and then the man and dog went on. He let them get ahead a block or so before he moved again. Waiting there, he reflected how seldom it is to have a quiet moment in this city. He had become attentive recently to the sounds of the city. Why was it always so loud? One could seldom stop to listen in that city without a human noise intruding almost immediately. This thought had started to reoccur to him: if you were to go back a couple of hundred thousand years the sound of humans would have been one of the rarest on the planet. “Imagine,” he’d said to his wife, “that you went back to those ancient East African plains and overheard some guttural noises, those might be from the rarest animal on the planet. Humans!” She’d seemed interested. But who can tell?  Now of course this very animal is drowning out the sounds of most other things.

He felt gloomy. We should just leave the city, he resolved. By now, his fingers were really quite cold and his sinuses started to throb ever so slightly. He determined not to mention this to his wife.

That sparrows are garrulous in wintertime is not surprising as they are always chatty, aggregative, birds. At first, he did not spot them though he heard them close-by. Then he noticed that they had congregated about a bird-feeder at a third floor apartment window. Two or three in flight at a time, the birds squabbled at the feeder. Below them, shivering on the ledge, a row of others were arrayed like early morning commuters waiting for a late bus. Below these, two stories down, were yet more sparrows clustered in a low hedge. Those congregating below had ruffled up their feathers and appeared twice the size of those at the feeders. The birds in the shrubbery chattered away and despite their almost globular shape, they seemed cold. He was frozen just looking at them. Every so often, one or two of those in the shrubbery would take off, alighting first on the ledge and then they would mount an assault on the feeder. The birds already there would object for a bit, but seemed to quickly relent. It was as if the needs of those frozen in the hedge gave them some priority. In reality, he reflected, those who had just fed were temporarily sated on seeds and did not have the will to withstand the assault from below. The dispossessed sparrows would either descend to the ledge, or descend all the way to the branches of the shrub.

He watched and listened for a while to this little spectacle. It seemed like this cycle might continue for as long as the cold persisted, until the seed ran out, or conceivably until the birds dropped from the branches and froze on the ground. Happy with his little speculation he was about to continue on his way. He noticed then, however, that in addition to the birds at the feeder and those on the ledge and those in the recesses of hedge, there was one more bird. This one sat alone on a ledge on the second floor, a little off to the side from the others. In the time he stood there to watch this bird, she barely moved. She had not ruffled her feathers against the cold, she had not made a raid upon the feeder, nor had she descended to the ground. She was not part of this rotating wheel that sustained the other sparrows. Had this bird simply realized that she was dying, and had given up? Or was this yet another part of the cycle, a part that he found less easy to fathom. He took a mental note and then left.

He would return the next day and see if she had indeed perished, though he wondered if he would recognize her body even if she had.