Senior Fellow Judith Roche has published a new book, “All Fire All Water” 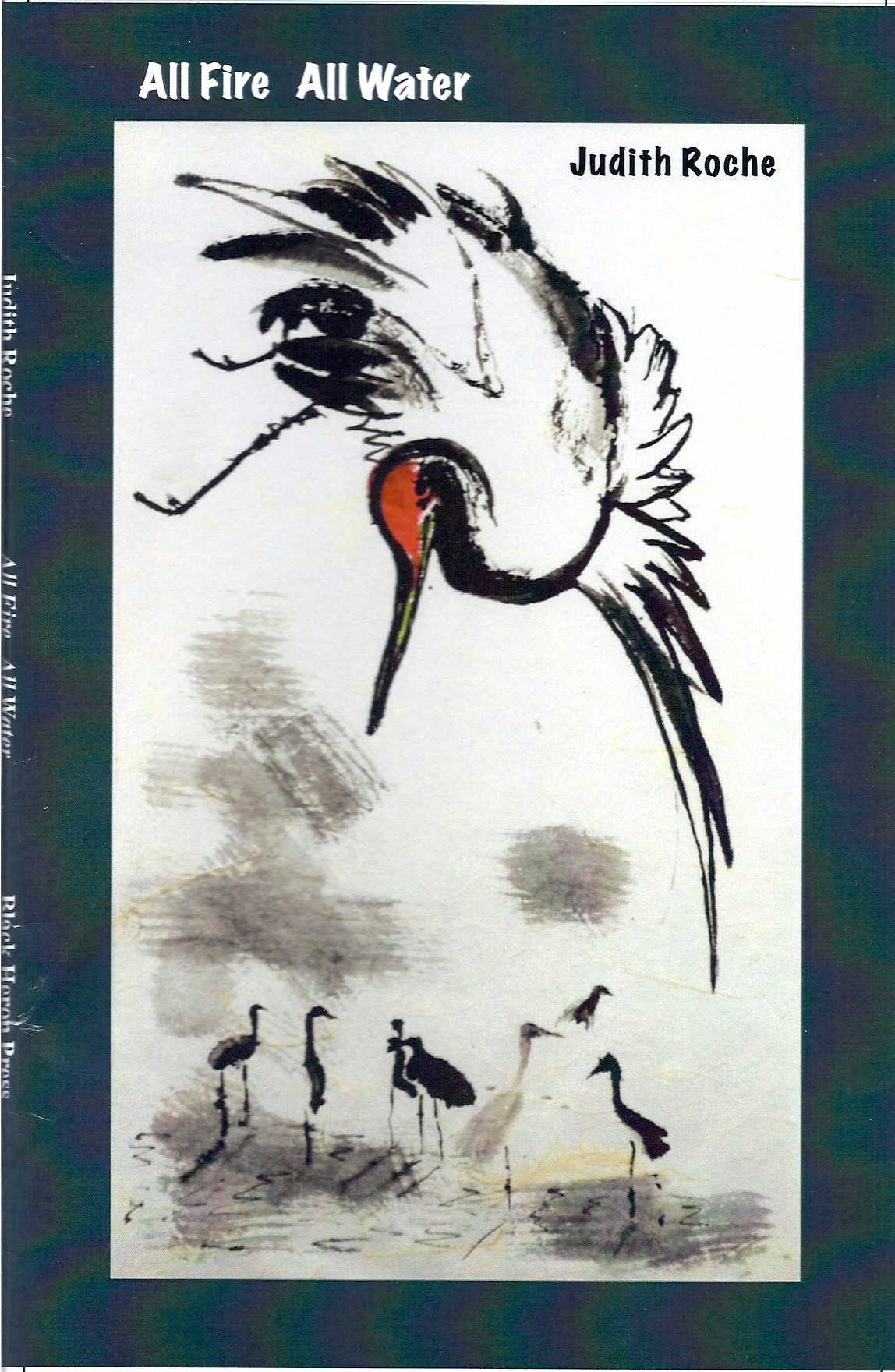 “Judith Roche’s fourth collection of poems, All Fire All Water, consists of four parts. “Rivers Have Memories,” the first part, explores nature and our relationship to it. Poems include fish and birds, bees and wolves, storms and the changing of the seasons. Drawing from the Salish Sea, where Roche lives, the Pacific Ocean, and the northern Great Lakes, these poems are steeped in water. But there’s plenty of the fire of passion in this collection as well. In “A Bird Caught in the Throat,” Roche turns to “The Face of War” and the horrors of unnecessary suffering; e.g., the “blood for oil” the 20th and 21st century have brought us. She writes of a usually well-intentioned friend from her liberal church who says she would torture those who are cruel to animals. In “Hoffa” she invokes a childhood memory of the unthinking pain adults can inflict on children, in this case, James Hoffa (the son, not his famous father) in the 11th grade.

In “The Husbands Sweet,” a play on suite, she looks back from a great distance to a marriage both painful and beloved. These poems are in turn ironic, playful, rueful, and humorous, but still keep all of the sorrow intact. There are poems of other assignations after the bitter breakup of the marriage.

The final section is “We Are Stardust,” the title taken from the Joni Mitchell song. These poems pose existential questions and explorations of identity and the possibilities of honest communication with others. Roche has a nonverbal, handicapped son and these poems are informed by some of the frustration of communication with him, other than that infused by profound love. She wonders if we can understand the nonverbal language of other creatures, especially crows, and the possibility of bridging the gaps between us and other sentient beings, including ancient beings. In “Linear B” and “Linear A” she tries to understand ancient Greece, the culture and the people, through what we know of their language. In “Metaphors of Dust,” she explores where we come from: “As it turns out, we actually are stardust./ I thought it was a metaphor/ of life and space and time./ Apparently, our materials are 13 million years old./ We are star stuff pondering the story/ told in the life of the stars.”

Throughout this collection, the poems are infused with the music of the language in careful interplay of assonance and consonance.”

Testimonials for All Fire All Water:

“Judith Roche has spent years developing an impressive body of poetry. In All Fire All Water, she demonstrates her considerable skills in presenting mature and nuanced passions, humor and hard-earned insights. There is much to be learned from these poems and much to be praised.” —Sam Hamill

“All Fire All Water is both a hymn to all that is broken in the world and a song of celebration for the earth’s renewal and rebirth. Full of beautifully imagistic poems, this book expresses the poet’s sorrow and joy at all we have lost, all we have failed to protect and cherish. Roche also deals wit the sorrow of failed relationships and the joy of the children created from them. In the midst of pain, she finds irony and humor, and carries us with her on this incredibly passionate journey.” —Maria Mazziotti Gillan, American Book Award winner

“I have been a fan of Judith Roche’s poetry for several decades, and All Fire All Water is an absolutely brilliant collection. Here the poet brings together her years of unique life experiences with a genuine love and understanding of nature and ecology. There are nature poems here that would grab John Muir’s, Rachel Carson’s and Edward Abbey’s attention and imaginations. There are also insightful, satirical poems that are thought-provoking and sophisticated in their bitter-sweet sad humor. These poems are both significant and beautiful. If poetry collections were to be compared to popular music, then this is Judith Roche’s Sergeant Pepper.” —M.L. Liebler, poet and editor of Working Words.