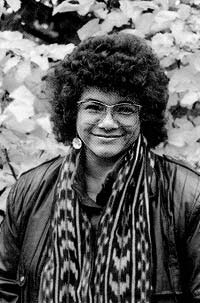 Roberta Hill’s, poet and BEI Emeritus Fellow, poem “Philadelphia Flowers” is going to be discussed by a panel as well as drawing on their experiences. The panelists will discuss it at the “Cultural Sustainability and the Pursuit of Community” Event.

In the cubbyhole entrance to Cornell and Son,
a woman in a turquoise sweater
curls up to sleep. Her right arm seeks
a cold spot in the stone to release its worry
and her legs stretch
against the middle hinge.
I want to ask her in for coffee,
to tell her go sleep in the extra bed upstairs,
but I’m a guest,
unaccustomed to this place
where homeless people drift along the square
bordering Benjamin Franklin Parkway.
From her portrait on the mantel,
Lucretia Mott asks when
will Americans see
how all forms of oppression blight
the possibilities of a people.
The passion for preserving Independence Square
For the rest of the poem.

“EAST ST. LOUIS – Illinois Humanities will present “Cultural Sustainability and the Pursuit of Community,” the second event in its statewide program series, The Country and the City: Common Ground in the Prairie State?, in East St. Louis on Thursday, October 25.

The panel discussion with audience participation will take place in the SIUE East St. Louis Center Building D multipurpose room, 601 James R. Thompson Boulevard in East St. Louis, on Thursday, October 25. Doors will open and free refreshments will be available at 5:30 PM. The program will begin at 6 and conclude by 8. Admission will be free of charge.

The event is part of a year-long, statewide initiative featuring text-based discussions of issues that affect both rural and urban Illinois communities, involving panelists who are well-versed in those issues from both perspectives.

The panelists will address questions such as these:

For a link to the rest of the article.