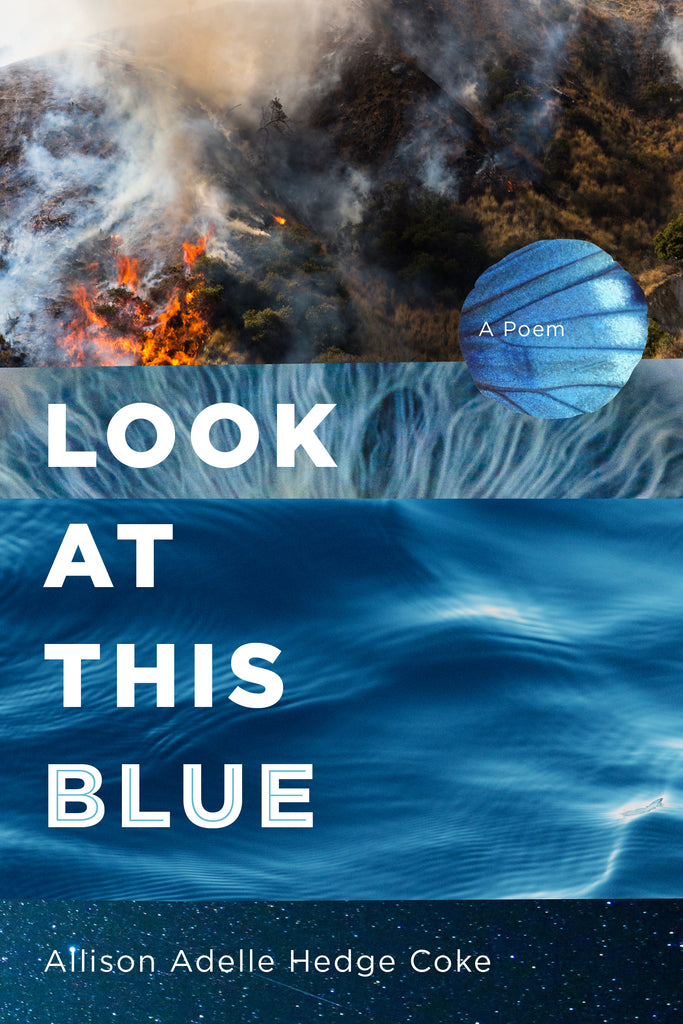 BEI Emeritus Fellow Allison Hedge Coke has an upcoming book of poetry that will be released on March 29th. The poetry collection, Look at This Blue, has already been getting rave reviews, and it is certainly not one to miss it. To order the collection, click here.

INTERWEAVING ELEGY, INDICTMENT, AND HOPE INTO A LOVE LETTER TO CALIFORNIA, LOOK AT THIS BLUE EXAMINES AMERICA’S GENOCIDAL PAST AND PRESENT TO WARN OF A FUTURE THREATENED BY MASS EXTINCTION AND CLIMATE PERIL.

Truths about what we have lost and have yet to lose permeate this book-length poem by American Book Award winner and Fulbright scholar Allison Adelle Hedge Coke. An assemblage of historical record and lyric fragments, these poems form a taxonomy of threatened lives—human, plant, and animal—in a century marked by climate emergency. Look at This Blue insists upon a reckoning with and redress of America’s continuing violence toward Earth and its peoples, as Hedge Coke’s cataloguing of loss crescendos into resistance.

Allison Adelle Hedge Coke, a Fulbright scholar, First Jade Nurtured SiHui Female International Poetry Award recipient, recent Dan and Maggie Inouye Distinguished Chair in Democratic Ideals, and U.S. Library of Congress Witter Bynner fellow, has written seven books of poetry, one book of nonfiction, and a play. Following former fieldworker retraining in Santa Paula and Ventura in the mid-1980s, she began teaching, and she is now a distinguished professor of creative writing at the University of California, Riverside.

Hedge Coke is the editor of ten anthologies and has served as an editor and guest editor for several magazines and journals, most recently World Literature Today. The social media hashtag #poempromptsforthepandemic hosts hundreds of original prompts she crafted as public outreach during the COVID-19 pandemic. A career community advocate and organizer, she most recently directed UCR’s Writers Week, the Along the Chaparral/Pūowaina project, and the Sandhill Crane Migration Retreat and Festival.

PRAISE FOR LOOK AT THIS BLUE

“​​What Hedge Coke provides readers in the pages that follow is the lightning rod. Her long poem slips in and out of images of violence against the land, specifically California, the flora and fauna and many immigrants and indigenous peoples of that land, the poor and cast out and overlooked and neglected and abused of that land, ever aware of the undercurrents that connect each transgression. While I’ve grown suspicious that one can give voice to the voiceless without doing further violence, these lines are not acts of ventriloquism, nor even quiet moments of witnessing. These are the aftershocks of the violences we as a nation would not see, haunting the periphery until there is nowhere we can look without being made at last to see. But in this litany of those who have been lost and those who are at risk, so too there is an act of preservation, a summons, and offering. If not promise, then a charge, a spark, to move us along. This book is like nothing I’ve seen from Hedge Coke before. It was just what I needed to read right now.” —Abigail Chabitnoy, Orion Magazine

“Here is a lifetime, relentless, inviting us bravely to sit in a circle facing the fire, speaking. Allison’s new collection covers her poetic depth and practice: travels, research, vision and visions, her wide wingspan—saving the people, the planet, and creatures. It is timely as all her books have been through the decades. Yet, the approach is radical, experimental. She meditates and dances through the trails of the text. Love and suffering, document and lyrical flight, human core and cosmic interrelationship, woman’s body and explosive mind. A prizewinner all the way. A warm, true heart.” —Juan Felipe Herrera

“Song from both above and within a texture of bad change, imbued with beauty, being in and of nature. This language, these careful lines, implicates us all as bits of process of extinction, violent—humans, together with the Xerces blue butterfly and California’s so many other spectacular species, lovingly named. Voices, vegetation, animals, human recall and event, like scratchings or petroglyphs. Who’s speaking? The record. A gorgeous, scary poem.” —Alice Notley

“Both ode and elegy for our natural and man-made environments, Allison Hedge Coke’s Look at This Blue speaks of California’s inevitable loss, its ‘temporal melt,’ its ‘death-wish façade.’ Hedge Coke calligraphies this tragedy and mythos with such poignance that you will be riveted until the collection’s very last line. Look at This Blue is not only timely; it is necessary.” —Lynne Thompson

“How blue are you? Xerces-butterfly blue, coyote-eye blue, lake blue, Mission blue: this is the blue of beauty and the blue of grief. Look at This Blue is a necessary reckoning with the ongoing, disastrous, criminal genocide perpetuated in the Golden State, amongst the beauty and riches of its landscape. As Hedge Coke writes, the poem is ‘the offering we make.’” —Eleni Sikelianos

“Allison Adelle Hedge Coke sings California with a garden of images, all life, named and splendidly watered by bewitching words—but this is no romantic paean. She documents genocide, massacres, slavery, arsons, lies, the laments of the pushed out and knocked down. Here’s the hardest truth, wrapped in lyric.” —Luis J. Rodríguez

“Allison Adelle Hedge Coke is one of the most important and innovative environmental writers of our time. Look at This Blue urgently asks us to see the wondrous biodiversity of the planet amidst the violent ravages of colonialism, capitalism, and ecological imperialism. Throughout, this cyclical poem sows dreams of a ‘bettering world’ where our relationships with the earth and more-than-human species are replenished through justice, protection, and love.” —Craig Santos Perez

“From Ishi to Riverside fairy shrimp, from sandhill cranes to vast human damage, Allison Adelle Hedge Coke calls out and calls to California in Look at This Blue. The book is a poem is a list, naming the eighty-four who died in the Camp Fire in Paradise, the millions killed in their native landscapes and internment camps and everywhere else. It reminds us of the extinct Xerces blue butterfly and, page after page, of the endangered ones: delta smelt, riparian woodrat, Sierra Nevada yellow-legged frog, Mono Lake diving beetle, finback whale, a list that, as it grows, becomes profound, tragic, gorgeous, overwhelming, and eventually a song. But a song not to be sung without the accompanying verses of greed and power, of politics, massacre, incarceration, exclusion. Not even the missing are missing: we are all included. The title repeats through the text as a chorus, a towline to hang on to, at one point referring to the chance mutation of coyote eye color, at another, the Hidden Lake bluecurl flower, fifty of which will fit on a penny. This is a book for the world we currently inhabit, the long unstoppable chaos, the season of losing everything we love. Listen. Let yourself belong. ‘Recite their names now,’ Hedge Coke asks us, coaxes us, dares us in her clear voice, unafraid. And then she names an appendix of resource links: ‘do the work.’” —Molly Fisk

“Holding this book in your hand, you catch the scent of high desert salvia and a whiff of charred ancient forests. Pyrocumulus loom over this text, an assemblage in the vein of Juan Felipe Herrera and C. D. Wright, etched in chants of forewarning and loss. Hedge Coke’s reckoning with the genocide of the Indigenous and the mass extinction of endemic species bares the roots of conflagration throughout ‘Indian Country, California, every bit.’ Look at This Blue is itself a blue flame that comes to us in time.” —Sesshu Foster

“Look at This Blue is a fiercely pulsating journey of love and despair. The earth crackles, the body heaves in these wrenching snapshots of personal, historical, and environmental disasters. You want to look away, but you can’t, as Allison Hedge Coke chronicles all the ways we are broken, our bone-deep griefs. Above and beneath these losses, she offers us singular joys: the trill of sandhill cranes, a girl with ‘eyes the green of August,’ small porpoises that ‘undulate in air.’ A list of resources at the end urges us toward the work of survival. We are still on the hook.” —Diana García

“In Look at This Blue, Allison Hedge Coke pulls us into a meditation on the entangled history of California’s ecological and racial catastrophes, which shape the place’s past and present. In an unapologetic disquisition focused on the actualities of California’s Indigenous peoples and their land, Hedge Coke lays bare the course that made way to the burning, flooding, splintering realities that shape California today. Both astonishing and piercing, hopeful and solemn, Look at This Blue plunges the reader into the fractal distortion of seeing the sun from underneath the water. This is a poem of urgency, of sorrow and memory, a call for us to see anew and change the destructive path we’re on before we are all consumed by it.” —Matthew Shenoda

“Hedge Coke does not just endeavor to show the world as it is; she encourages readers of diverse backgrounds to resist its inherent prejudices, and to effect positive change within it. . . . A poet with feet in the river, even as her head rests on a mountain top.” —Los Angeles Review of Books

“Erudite and complex. . . . Reading it, you can feel the rhythmic propulsion of each image as surely as you can feel your own pulse.” —The Rumpus

“[Streaming] reveals to us a mature poet of imagery whose sonics have shifted toward a be-bop poetics, in which rich, complex sound-patterns are essential to the collection’s meaning-making and emotional impact.” —World Literature Today

“Streaming is a continuous trail of light, a steady flow music from the heart of the motherland.” —Green Mountains Review

“This fine collection of poetry by Allison Adelle Hedge Coke makes a ladder of songs. . . . What is presented in this evocative poetry is not a ‘struggle for dignity,’ but a dignity for struggle.” —Joy Harjo

Winner of the 1997 American Book Award

“Hedge Coke’s dense narrative poems are crowded with memorable characters and situations. . . . She is a welcome new voice in American poetry.” —Jessica Hagedorn

“Allison Hedge Coke is a skilled, spirited young poet who is transforming and honing her social and personal experience and reflection to speak with the voice of a whole people.” —Amiri Baraka

“These are the songs of righteous anger and utter beauty.” —Joy Harjo

“These poems have so much to say that they can’t talk fast enough, and this poet is not afraid to speak the dangerous truth.” —Linda Hogan