Posted on May 9, 2019 Posted By: BEI Interns Categories: News 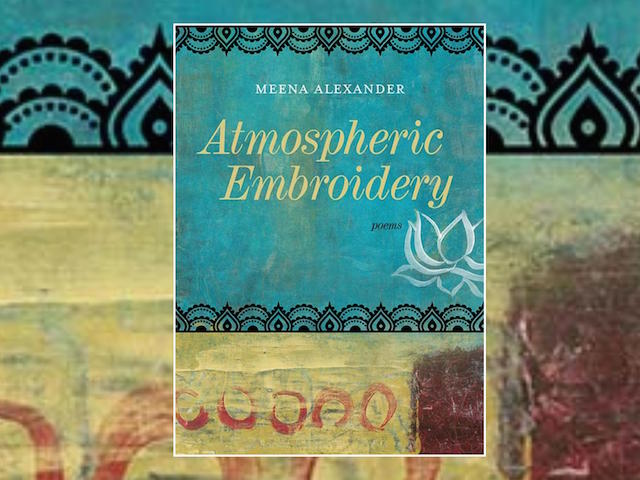 I read and re-read Atmospheric Embroidery so that I could ask her something that would be of interest. But I did not get to ask those questions. Her answers are in the poems.

The following is part of a series of essays and reflections published on The Margins in remembrance of the life and work of poet and scholar Meena Alexander, who passed away on November 21, 2018.

I was to have been in dialogue with Meena the week she last entered the hospital—Kimiko Hahn and I at CUNY Grad Center. All summer, I read and re-read Atmospheric Embroidery so that I could ask her something that would be of interest to her—most distinctly her connection to “the blues.” But I did not get to ask those questions. Her answers are in the poems, and that is how it will be.

Meena Alexander was a consummate woman of letters, moving her pen from poem to essay, from theory to lyric with what seemed like ease, which came from her dedicated discipline. What always surprised me was her down to earthiness, because her oratory seemed to come from some other personage.

My last encounter with her was at Carnegie Hall, where one of her children was in a chorus premiering a work of the composer Zaid Jabri and the librettist Yvette Christianse. The piece was powerful and the chorus performed beautifully. Meena looked stunning as always—she was a beautiful woman. But she told me why she had been absent from many things. I did not know how malevolent the cancer was. But despite (because) she was so intensely present, so there for her family, for an old friend, for the composer and librettist, damn it for this world.

I just taught “Dwelling” from Atmospheric Embroidery and I think of the way she wove fabric and fire—that which holds, that which destroys in that poem about where we can and cannot stay. The world is so much making and unmaking—she understood that so clearly. She just knew.