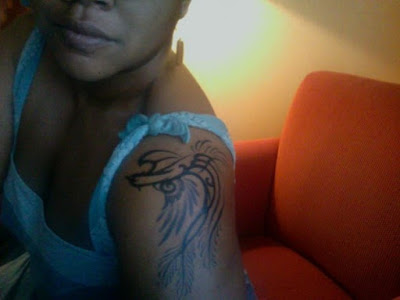 Metta Sáma is author of Swing at your own risk(forthcoming Kelsey St. Press), the year we turned dragon (Portable Press @ Yo-Yo Labs), le animal & other creatures (Miel), After After/After “Sleeping to Dream” (Nous-zōt Press) and the web-book, Nocturne Trio (YesYes Books). She lives in Winston Salem, NC with her toddler.

What other poetry books have you been reading lately?

For pleasure, I’m reading Linda Ashok’s Whorelight, which the poet, Ravi Shanker N. described as: “[P]oems [that] come from a mind that reacts to sensations like chlorophyll in a leaf”; Fatimah Asghar’s If They Come For Us, which I saw at a big box & was so excited to see poetry books on the shelf that I almost left it there hoping a non poet would snag it!; TC Tolbert’s Gephryromania, which I’ve been slowly reading for nearly a year, unwilling to let the book go & Maria Melendez’s How Long She’ll Last in This World (“Breath is my first language, “American” second”). For classes: Craig Santos Perez’s [saina], Chen Chen’s When I Grow Up I Want to be a List of Further Possibilities, Morgan Parker’s There are More Beautiful Things Than Beyoncé, Shara McCallum’s Madwoman, Bianca Stone’s Mobiüs Strip Club of Grief, Trista Mateer’s The Dogs I Have Kissed, Luther Hughes’s Touched, Hazem Fahmy’s Red Jild Prayer, Morgan Christie’s Variations on a Lobster’s Tale, Raquel Salas Rivera’s poemas necesarios y otras malas mañas/necessary poems and other bad habits and Natalie Eilbert’s Conversations with the Stone Wife.

Has your consideration of poetry changed since you began?

When I first began writing poems, I had maybe read one or two poems prior to writing poems. I don’t recall ever reading any poems in (grade) school and we didn’t have poetry books in the house. My dad had pens made up with lines from “Invictus”: “I am the Master of my Fate/Captain of my Soul” and I didn’t know where those lines originated. So, my understanding of poem making was nil. As a college student, I thought that “great” poetry was written by White people, because these were the only poets we read. Actually, scratch that: I thought poems, period, were written by White people, great or not. In the years since then, I met poets such as Sean Hill, who was a student at the time that I was a student, Adela Najarro, Blas Falconer, Mike Perez, Helena Mesa, all students at the time that I was a student, and later Jericho Brown, who was entering a program as I was exiting, and Srikanth Reddy, who was on a fellowship at the same time that I was on a fellowship. So, I began to see and have conversations with poets of color and during my time in a PhD program, the poet Maria Gillan introduced us to working class poets, so poetry expanded for me. These were living poets, celebrated poets, forgotten poets, and some, of course, were no longer alive but their works were alive, forever; poets such as Audre Lorde, Wanda Coleman, Lorenzo Thomas. Even later, when I moved to New York City, I met poets such as Amy King, Rachel Levitsky, Saeed Jones, Rosebud Ben-Oni, Tony Medina, Muriel Leung, Ekere Tallie and the great poet-quilter, Jacqueline Johnson. And these poets weren’t all working towards the epiphanic, image-based ending or the purely imaginative narrative that I saw clouding the works of White writers, particularly those in academic programs, and they weren’t all working in stanzas and some, like Adela, were talking back to the Canon. Every step of the way, my consideration of poetry has expanded and deepened, from the teachings of the great poet, editor, mentor Herb Scott to the living room class teachings of Patricia Spears Jones.