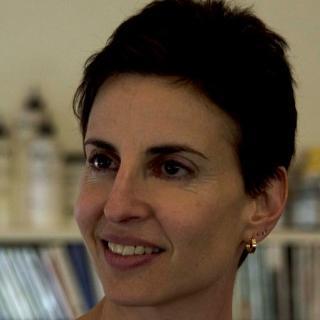 He begins with only a shadow of the toil

to tell He begins with not even

and underfoot makes a slip and wandering Begins by lifting

a bruise Begins with the airsound

of an uncommon question or a thorn and ekes

a scratch some call wrong and so

the ritual of beginning begins a bent depression He circles

a groove leaping to the shortest He begins

to put his arms through the room

with his transubstantiated trills that exist to begin

round about me Begin

urgent angles He begins to not begin but to

turn back and it is then I hear the purpose

of echo and the open body

of silence The terrible world with its plinks and more

half-remembered laws and no one

Lauren Camp is the author of five books, most recently Took House (Tupelo Press). Her poems have appeared in Witness, Poet Lore, Kenyon Review, Terrain.org and Image. Honors include the Dorset Prize and finalist citations for the Arab American Book Award, the North American Book Award and the New Mexico-Arizona Book Award. Her poems have been translated into Mandarin, Turkish, Spanish and Arabic. www.laurencamp.com