Linda Hogan’s “Lowak Shoppala” to be Performed in Oklahoma City 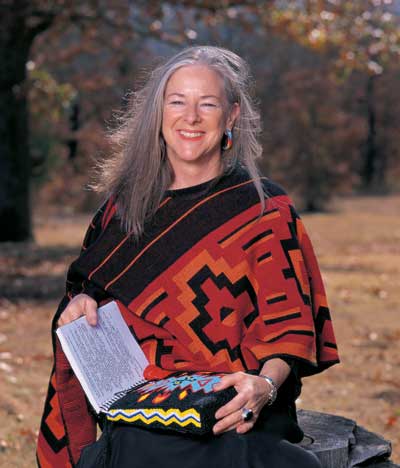 Linda Hogan, BEI Emeritus Fellow, is one of the three composers of “Lowak Shoppala’, including Jerod Impichchaachaaha’ Tate and Margaret Roach Wheeler. Here is the original article by Tony Choate.

The composition, “Clans” from “Lowak Shoppala’ (Fire and Light),” is a theatrical expression of ancient Chickasaw clan leaders.

“The title of the work comes directly out of the poetry of Linda Hogan,” said Tate. “She composed a poem called ‘Fire and Light’ for the tribe in 2004. I was so moved by the poetry and the idea that I realized I wanted to use her poetry in the work as well.”

February’s show marks the orchestra’s début of a composition by the Emmy Award-winning Chickasaw composer.

Words for the composition were written by Hogan, a 2007 Chickasaw Hall of Fame inductee; winner of numerous awards for books, poetry, and novels; and a global lecturer and writing teacher.

Hogan received a master’s in degree English and creative writing from the University of Colorado at Boulder. She writes from a Native American perspective and is widely considered one of Native American literature’s most highly regarded writers.

Chickasaws Jason Eyachabbe, George Jesse, Travis John, Nola Monetathchi, Malcom Smith, Nick Underwood and Jared Walker will be dressed in historically accurate regalia crafted by Wheeler, who has been working every morning before dawn for several weeks to prepare for the show.

“Lowak Shoppala’ is one of the highlights of my career,” Wheeler said. “It allowed me to use my research from a fellowship with the National Museum of the American Indian on Mississippian Textiles. The Mississippians, or the Mound Builders (900 AD-1500 AD), were the ancestors of the Chickasaw people.

“I designed the handwoven costumes from images I had photographed and drawn from research on shell carvings, ceremonial pipes and pottery designs. There was a great amount of imagination and care that went into creating each clan leader for the production,” Wheeler said. “Jerod’s music and Linda’s words set the tone in my studio. I needed to create costumes that were the essence of the history of our people, the Chickasaw.”

Tate’s work was included in the concert at the request of Alexander Mickelthwate, new conductor and musical director of the Oklahoma City Philharmonic.

“I’m excited to include music from American Indian culture in our programming. Jerod Tate is a wonderful, creative man who is a classically trained pianist and composer and uses this ability to express his Chickasaw culture in a magical way,” Mickelthwate said.

“Lowak Shoppala’” was commissioned by the American Composers Forum as part of its Continental Harmony Program, an initiative sponsored by the National Endowment for the Arts, to celebrate the full spectrum of American culture.

It was first performed in 2009 at the Ataloa Theater in the Hallie Brown Ford Fine Arts Center on the East Central University campus.

For years, Tate’s career has been dedicated to American Indian folk music in a classical repertoire.

“I am proud to bring our Native melodies into the same arena as Russian, French, Hungarian and German composers,” said Tate. “This performance by the Oklahoma City Philharmonic provides yet another venue in which the Chickasaw culture is represented on the classical concert stage.”