With the hopefulness and optimism of pre-pandemic summers, I composed a summer reading booklist. Historical fiction mixed with some pastoral magic realism would be a great reading experience designed for learning American history and reawakening a love of language and imagination with magic realism. As for my reading choice of memoir: it is always a delight to read Maxine Hong Kingston.

We read history to comprehend how the present moment has been determined by our collective pasts. Chickasaw poet and novelist Linda Hogan portrays the white man’s insatiable greed against the 1920s Oklahoma oil boom in Mean Spirit. James McBride introduces the reader to the greatest American hero of all, John Brown, in his novel The Good Lord Bird. A policeman becomes paralyzed  incident in a 1968 Detroit anti–Vietnam War march changes the lives of two sisters, as well as their families and friends, in Her Sister’s Tattoo.

Magical realism fits into this pandemic summer. With just a few lyrical phrases, something like the brush strokes of a pastoral watercolor carefully applied, these novels by Ana Castillo, Alice Hoffman, and Chitra Divakaruni has the reader believing that all of the incidents and characters presented are completely reality based. 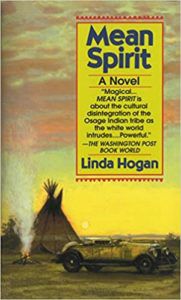 Chickasaw poet and novelist Linda Hogan’s debut novel was nominated for a Pulitzer Prize in 1991. The novel depicts the white man’s insatiable greed for the oil rich Oklahoma land of the Osage tribe in the 1920s. When a pattern of “suspicious deaths” begins with Grace Blanket, the richest Osage in the territory, and then with the Graycloud family who sheltered Grace Blanket’s daughter Nola after her mother’s death, a Native American government official from Washington D.C., Stace Red Hawk, goes west to investigate. Along the way to solving the assault against the Osage, Stace Red Hawk begins a spiritual journey back to the Native American people that he had left behind.