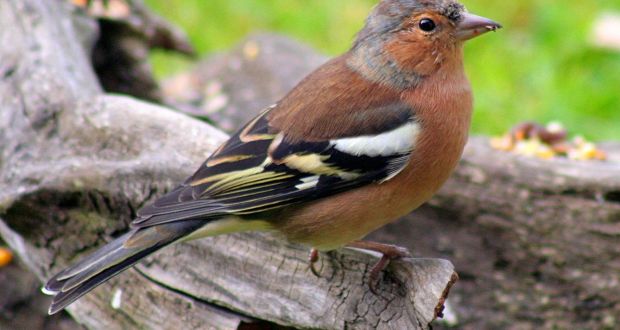 Liam Heneghan, BEI Scholar, recently wrote his first fiction piece-published first on the Irish Times Website- read it below or here from the original.

1. My mother once saw the chaffinch (Fringilla coelebs; in Irish: “Rí Rua”) take a shit on Grafton Street and she scolded him. He just kept repeating his distinctive call “pink, pink, pink, trup,” over and over again, but you could kinda tell that he was mortified. Good bird, really; had trouble later with the auld drugs, and got very stout. Died way too young. In the eighties, those birds had a string of great hits.

2. I worked one summer on the Cork Train on the food trolley. A young fella with me in the kitchen car was really into the skylark (Alauda arvensis, in Irish: “Fuiseog”). He could play skylark’s famous guitar riff on his knock-off Les Paul (you know the one, it goes “chirrup… chirrup, trrrp”). Claimed the skylark did not play a real Gibson either. I will never forget that little detail; I lost touch with that kid later on.

3. Back in the day, I’d hear corncrakes (Crex crex; in Irish: “Traonach”) along the Co Mayo coast all the time. They are a rare breed now, of course; almost extinct. Once when I was pushing my bike up a laneway I saw the corncrake standing with his sister outside a cottage. He must have thought I had looked at his sister funny, as he snarled “kerrx-kerrx” at me and started to fling his droppings. I was told afterwards that the whole family was mad. Brothers all musicians in America.

4. I heard the wren (Troglodytes troglodytes, in Irish: “Dreolín”) play in An Béal Bocht on Charlemont Street Dublin back in 1986. Small fella, drab feathers; mainly sang in hedges. It was almost Christmas time; when he finally sang his big hit “check…, check, churrrrr”, there wasn’t a dry eye in the house. Very Christmassy. Then they passed around a can, collecting for “the lads north of the border.” They were different times, back then, that’s for sure.

5. Every summer in the mid-80s, I’d pitch a tent in a field by the River Flesk in Killarney. Right beside the Gleneagle Hotel. Back then, the woodcock (Scolopax rusticola, in Irish: “Creabhar”) was blowing up. He’d fly in from his perch in the oak woods and appear there on Friday evenings, flying high above the mainstage groaning and whispering ‘pissp.’ “Roding” is what the birders call it. The fans went wild when he swooped down and ate earthworms. You can never really tell what some people will think is cool.

6. My father and I took a trip up in Gweedore in the early 90s and he tried to strike up a conversation with the Lesser Black-backed Gull (Larus fuscus, in Irish: “Droimneach beag”). Big bloke, wore a heavy sea-worthy jacket. I’d seen that bird play all the seisúns in pubs in the area. My dad let out a very plaintive ‘peep, peep, peep’ and then anxiously flicked his head from side the side. But the gull either didn’t understand him, or perhaps he thought he was a herring gull. My dad muttered something under his breathe, but I did not quite catch it.

7. When I moved to New York in December 1987, I avoided Irish birds as best I could; they made me homesick I suppose. Once I was on a “2” train going up to the Bronx Zoo and spotted the starling (Sturnus vulgaris, in Irish: “Druid”) fly on at Times Square. She used to busk at the Dandelion market on Stephen’s Green. Sold jewelry on the side, condoms too. It had been snowing heavily so she had ice packed hard on her toes. Starling slipped, swiveled and fell onto an old woman’s lap, called out “chackerchackerchacker” and laughing like it was the funniest thing. Everyone on the subway car just ignored her; she’s just put out her new album.

8. You will consider me nostalgic, I suppose, but the music those guys were making in the 1970s was rawer, more radical, really. I once heard the fieldfare (Turdus pilaris; in Irish: “Sacán”) in a park in Dublin sing one glorious note, just a single gawddammed note, sustained it for an eternity, as if he really did not give a shit. But you could really feel the emotion in it. I dated his sister back then, but told her I didn’t want to meet her garage band loser of a brother. I regret that now; those guys became huge in America.

Liam Heneghan is author of Beasts at Bedtime: Revealing the Environmental Wisdom in Children’s Literature