Liam Heneghan in the Daily Campus! 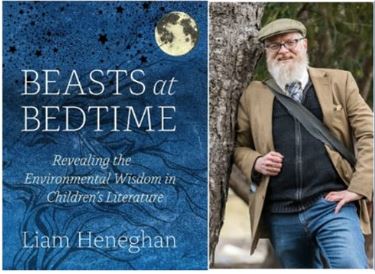 Check out the newest review of Liam Heneghan’s, BEI Scholar, book Beasts at Bedtime! Click here for the original post.

Children’s literature as a natural wonder: How books introduce young readers to the environment

There are two ways in which humans view the environment according to Dr. Liam Heneghan of DePaul University: People either look despairingly on a decaying landscape or with a sense of wonder at the natural world. Though these two viewpoints may seem rather complex, the professor of environmental science and studies argued that humans’ perspectives on the environment are formed early on in life and that children’s literature helps to shape them.

During his talk on his book “Beasts at Bedtime: Revealing the Environmental Wisdom in Children’s Literature” for the Teale Lecture Series, Heneghan pointed out examples from classic children’s literature to demonstrate the power of stories to socialize young children about the environment. The associations that children form with places in their readings allows them to recognize natural places in their own life and to develop a sense of “attunement” (delight) in the environment. Heneghan also stressed that these important environmental themes occurred naturally in children’s literature: He did not need to search for literature on specific natural subjects.

“Embedded in this literature, you’re going to find all of these important things,” Heneghan said. “I was not so concerned about finding specialist books, you know, what are the children’s books that are specifically about climate change or biodiversity laws or soil erosion—it turns out there’s not that many out there.”

For the second half of his lecture, Heneghan took his audience on a journey through wild islands and pastoral paradises to showcase a few examples of nature’s importance in children’s literature.

According to Heneghan, a pastoral setting in children’s literature (like the setting in Frances Hodgson Burnett’s “The Secret Garden” or in A. A. Milne’s Winnie the Pooh series) promises harmony and peace. From these settings and stories, children learn to look at the natural world with curiosity and respect. In island settings, there is often a sense of magic and wonder. On the other hand, wilderness settings often indicate terror or danger. Similarly, urban settings usually portray a sadness at the lack of nature, whereas suburban settings allow children to see characters in an environment like their own.

Though children often respond strongly to natural places in their youth, as they grow older, they lose some of the association that they had with a certain place. Heneghan gave the example of the real-life Christopher Robin’s topenesia, his disassociation with a once-special place. After Christopher Robin had returned from war as an adult, he visited the places in his father’s stories and felt like he did not recognize them, that he had become estranged from his home.

“We kind of forget the connections that we had with places, and in fact, I think kind of reading about it in these stories again helps us revive our interest in these places when we talk with our children about these sorts of things,” Heneghan said.

Many students agreed with Heneghan’s point that children lose a sense of wonder for the natural world as they grow older.

“I think what I liked the most was the idea of venturing off with children in nature and how that kind of gets forgotten as you get older, but it’s something we need to be able to hold onto more,” sixth-semester natural resources major Anna Welch said.

Other audience members also noted the importance of adults being willing to share stories about the natural world with their children.

“I think it’s a larger issue in the part of adult (environmental) literacy and them being inspired to share it, those type of stories, with their children,” eighth-semester digital media and design major Corlis Fraga said.

While children can often lose their attunement to nature as they grow up, Heneghan pointed out that a book can still have elements that relate to the environment even if its story is not explicitly about nature. Heneghan gave the examples of “The Hunger Games,” in which it is the skills that Katniss learned while hunting in the woods with her father that help her to survive, and the Harry Potter series, calling Hogwarts’ curriculum “basically a biology degree.”

“I think the most interesting point to me was the ‘Harry Potter’ point,” sixth-semester natural resources major Chris D’Aiello said. “I never really put that into perspective that a lot of that really is connecting to the natural ways.”

Heneghan ended his talk by restating the importance of maintaining a sense of wonder at the environment because this attunement with nature allows humans to be environmentally literate and to make environmentally conscious decisions.

“What I’m trying to encourage ultimately is an enthusiasm about reading these books in a way that really capitalizes upon the revolutionary potential of them,” Heneghan said. “And I think ultimately, my provocation to you is that the world is not so old or ruined that we can’t get back to some sort of originary wonder about the world.”

Stephanie Santillo is a staff writer for The Daily Campus. She can be reached via email at stephanie.santillo@uconn.edu.