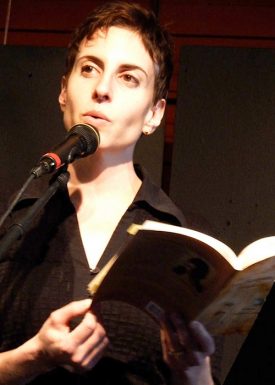 Between “Turquoise Door” and “One Hundred Hungers,” history can be home too

After growing up in New York and working in a range of professions from disc jockey to visual artist, Lauren Camp found a way to blend her art and poetry. Camp spoke with Arts and Entertainment to discuss her love for her craft and her inspirations prior to her reading at New Dominion Bookshop on May 11.

“I couldn’t do it easily, and I loved that — I still love that.” Camp said. “That’s still one of my favorite things about it, that it takes so much work and effort and returning to it again and again”

After finding a home in poetry — and her gift for it as well — Camp began to travel and write in different places around the country. After residencies in the Pacific Northwest, and writing about her father’s life in Baghdad, it seemed like fate that Camp found her home in the desert lands of New Mexico  — specifically when writing in Taos, in the historic home of Mabel Dodge Luhan, an early feminist, arts patron and writer who hoped to create a utopian society in Taos — influenced by the many great artists who once stayed there as well.

“The house feels, not old in like an old-fashioned way, but like steady, stable. And it was nice to be there for that,” said Camp. “To be in the rooms that these people would have gathered in, talked in, and worried over whatever it was they were creating.”

Camp did create a beautiful poetry collection called “Turquoise Door.” Camp’s fourth collection introduces readers to the cultural background of Taos, N.M. in the early 20th century and Luhan’s home. But Camp did not set out to write about Luhan, Taos or even feel any connection to the house itself.

“I didn’t go to her house with any intention of paying any mind to her. She was not on my radar,” Camp said. “She was just the vehicle by which I was going to get to focus on some other projects … But I walked into that house, which is a traditional pueblo revival style home, and I all [of} the sudden was like ‘Who is this woman and how did this come to be?’”

“The more I opened that history the more interesting it became,” Camp said. “Mabel was a real vehicle for bringing people together. She was remarkable about that. And I have to say … I don’t think I would have liked Mabel, and I don’t think she would have liked me. But I have a lot of respect for at least this portion of what she did, of bringing people together — into conversation, and giving people opportunities to explore their own creativity in the space she had created.”

Camp found a home in the same space that great artists — Georgia O’Keeffe and D.H. Lawrence to name a few — who stayed in Taos alongside Luhan did, but her writing is not just tied to the artists who also held residency there. Anywhere Camp goes seems to weave its way into her heart and her writing, but New Mexico certainly holds a special spot.

“I landed here in New Mexico, and suddenly place, like the place I belonged for the first time made sense,” Camp said. “And every other place I went I was great at just sort of settling in for a while and then I would be done and then I would think okay this isn’t doing it somehow, this isn’t enough. And then I would go off in search of some other thing. I don’t even know if you had asked me if I would have said it was a place I just needed some other experience. And then I moved to New Mexico and I didn’t need that in the same way.”

“It’s my way of learning, of consolidating the experience, of holding the experience, or maybe even just understanding — to paying attention,” Camp said. “So because I’m here I will continue to write about here, there’s plenty here, and actually, there’s plenty everywhere to write about for anybody who is willing to pay attention. But again, I don’t know whether I will take on another large project about New Mexico or New Mexico history, ‘Turquoise Door’ was kind of complex because it ended up being about history and a little bit about politics and about culture and about the environment and environmental dangers, and me.”

Camp will be in the Shenandoah Valley for 11 days, starting with a reading at New Dominion Bookshop May 11. With talent and wisdom to spare, we’re lucky to have her visit our side of the country — maybe we’ll even make it into her next collection.