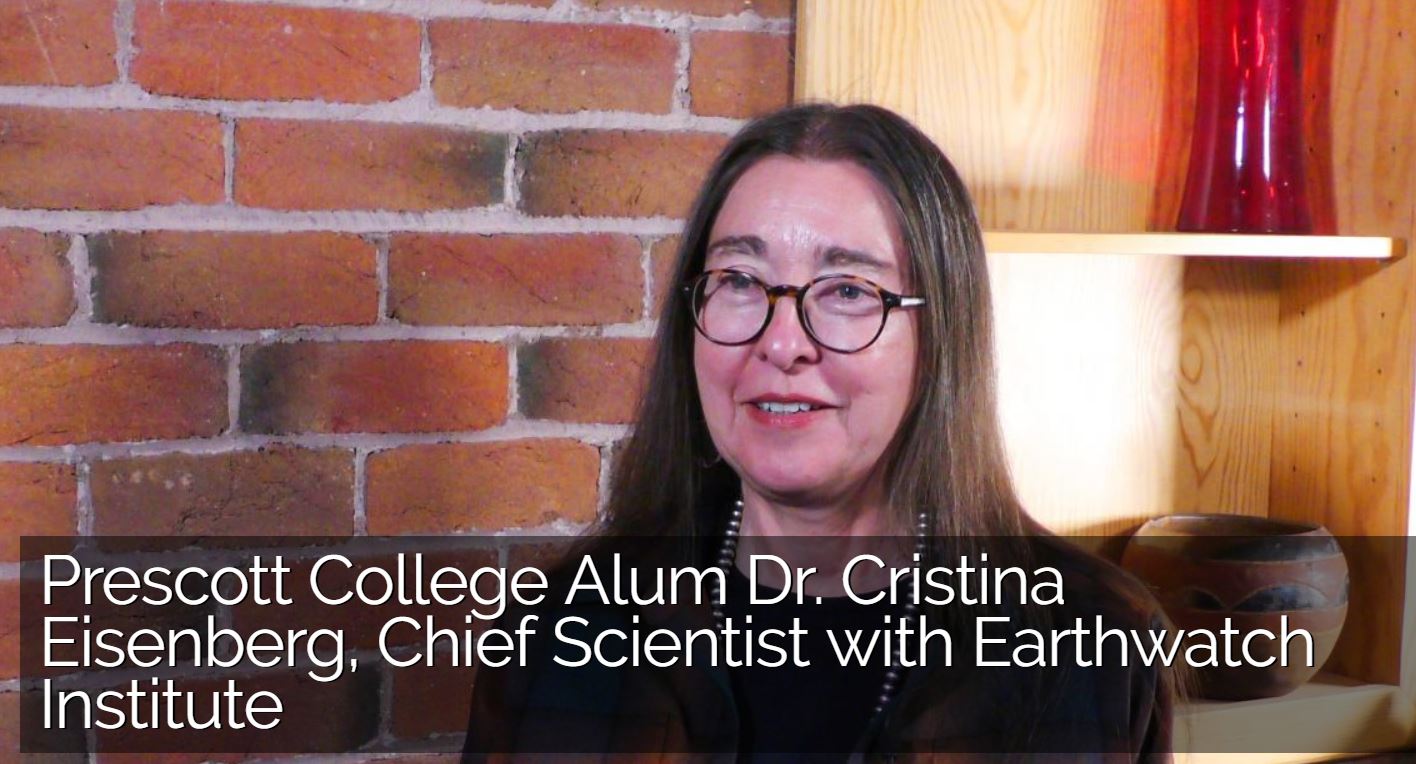 Dr. Cristina Eisenberg has accomplished many things since attending Prescott College. She is the Ecologist and Chief Scientist with Earthwatch Institute, she published a book based on her masters thesis on the virtual extinction and eventual conservation of wolves called “The Wolf’s Tooth”, and she studied at and became a faculty member of Oregon State University. However, her latest achievement was “a huge surprise to me that they offered me that award because it is is a recognition that diversity matters, that diverse views and challenging the system is reinforced as a necessary thing to do.”

She credits Prescott College with teaching her how to deal with “political challenges in a professional way.” Eisenberg started at Prescott College after having been away from school for almost 30 years. “So, I was a stay-at-home Mom living in one of the wildest places in Montana, our back yard is literally 2.5 million acres of federally protected wilderness. And I was very frustrated as an activist, I felt that I needed a graduate degree in order to be respected and get more credibility. But guess what! I did not fit into the standard mold for college. So a friend who was a student at Prescott told me to check it out. So I did, and immediately I felt that I had come home, and today I serve on the Prescott board of trustees and every time I come here for a board meeting it feels like coming home. So, I got my masters degree in the environmental studies program.”

After publishing a book on wolf conservation based on her masters thesis, Eisenberg was approached by a professor in the College of Forestry at Oregon State University. “Now, OSU is the most conservative, traditional research university you can imagine, it’s the opposite of Prescott College,” she said. “However, what I learned at Prescott was how to deal with political challenges, and how to do that in a professional way. So I accepted the offer, I went to Oregon State University, the very first week that I was there, the very first day of class, I went to my new public policy graduate class.” There she discovered that a masters student had had his work on how salvage logging is detrimental to forests suppressed because of the conflicting logging business interests of the dean. “And so I was outraged, but if I knew that I wanted study wolves I needed a very rigorous science degree to finish off what I got at Prescott College. So that first week I challenged the system there, and I ended up testifying in congress about this, and there were some big changes at that school because of that.” She continued, “Now I would’ve never been able to do that if I hadn’t gone to Prescott, and while all this was going on I was in a Ph.D. program that I was getting grades for the first time because there were no grades at Prescott back then and I managed to get straight As. So the university gave me an award for moral courage, so they honored what I did, but I would never have had that moral courage if I hadn’t come here to Prescott. And what you learn at Prescott is you have to challenge the system. There are times when you really have to be that force of change and they teach you the skills to be that force of change.”

Eisenberg credits her ability to work within the system to affect change with OSU’s decision to honor her with the Distinguished Alumna Award. “The school sees me as a role model for other people who are potential changemakers who don’t fit into those boxes at a traditional school. And to me that award means a lot because it’s not about me, it’s about the legions of people, like the students at Prescott College, who are on that path and are feeling like I did when I started, like “I don’t have any power and I don’t know if I can do this, I’m so upset about how things are going on the planet and what can I do?” to being instruments of change. And I see myself as an instrument, a vessel if you will. It’s not about me or me gaining recognition, it’s about how can I help. And so there’s a synergy to it. And that synergy, you know, how to develop that synergy, that’s part of what I learned here. So I deeply value my education here at Prescott, I’m very closely connected to all my mentors and the students that were in my cohort. So that’s the kind of community that you get at a place like Prescott, it’s very very special.”