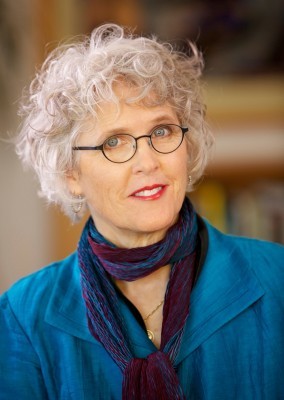 Crane Maiden is a love story of people and birds. Our new art book is a tale of loss and reunion, a dream, a dance of ancient birds believed to live for a thousand years. People flock from around the world to witness the red-crowned cranes dance their feathered ballet—they bow, cries plaintive, legs lifting in a mellifluous blur of bird, snow, and sky. Details of their dance mesmerize. Downy heads with crimson caps, black-edged wingspans so wide, fluttering. Thin legs in a delicate two-step, endless, elegant necks entwined. Mated lifelong.

For many years, I’ve had the recurring dream of this Crane Maiden story: A young girl on a riverbank, a mystical marshland of tall reeds. The village has chosen her to fly away with the beautiful, but mysterious Crane People. To bless her village, she must transform into a bird. But she is afraid and still lonely for her own people.

I first had this vivid dream fifteen years ago when I was speaking at an NPR Tech Nation national conference. The dream was so real, haunting, lingering long after I awoke. I sat down next to a stranger in the audience, who was watching a video on his laptop. There, on the small screen, were two red-crowned cranes leaping together in their exquisite courtship dance on the snow-clad stage of a frozen field.

“Oh,” I marveled, “I just dreamed this crane dance.”

The man smiled, “This is Hokkaido, Japan. In Asia, red-crowned cranes are beloved, symbols of good fortune, longevity, and immortality. They’re called ‘birds of happiness.’”

Throughout Asia, red-crowned cranes are revered for their beauty and as guardians of wetlands. In China, Taoist priests believed these beloved cranes transported departed souls to heaven. Tai chi still mirrors these eternal birds in the nuanced grace and stylish flow of the “crane dance.”

Transformed by crane music,
they wander into a parallel world, become birds.

Cranes are the oldest birds on Earth. There are fifteen crane species in the world, and China has more species than any other country. Black-necked and Siberian cranes migrate seasonally on wetlands, from Tibetan and Himalayan plateaus to Russian summer tundra, to Iranian and Turkish grasslands. Traditional communities revere cranes and welcome them with Crane Festivals to bless the planting of crops. Children dress up as cranes and gaily dance; in Russia, traditional elders and reindeer herders adorn themselves in elaborate crane costumes to frighten away and forbid bear spirits. 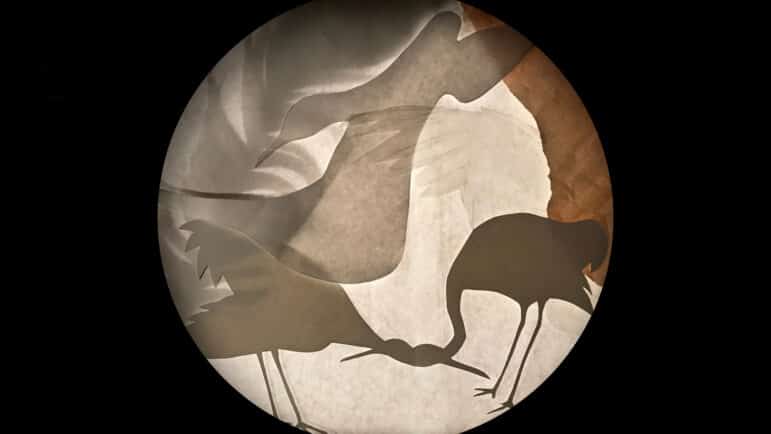 Cofounder of the International Crane Foundation, George Archibald, who has made a long study of Siberian cranes, marvels at the “spiritual experience of the crane’s musical, flute-like calls.” Their unison call is a harmonious blend of male baritone notes and female treble trills. Pure, numinous duet. Cranes also migrate in North America, especially the charismatic whooping and sandhill cranes, whose populations are in a historic decline from hunting, habitat loss, deforestation, and agricultural conflicts. Every March, half a million sandhill cranes pause in their migration along the Platte River in Nebraska. They fly in family groups, like dense clouds of smoke or delicate skeins that trace ever changing patterns against the sky.

Their voices speak of wide-open spaces, freedom of the skies, snowy wastes, and far-flung lands. Visitors and birders who spend nights listening to the throng of their full-throated cries—a prehistoric song of percussive trills and staccato warbles—enter such an altered state, they must be coaxed and called back in from the wetlands. Transformed by crane music, they wander into a parallel world, become birds. 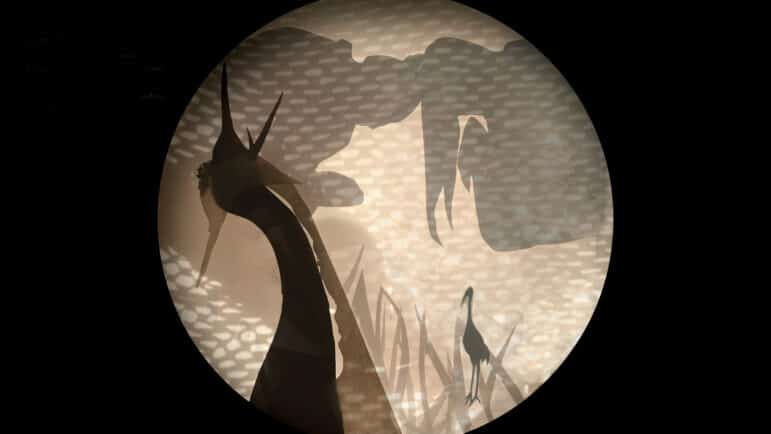 Red-crowned cranes are one of the largest cranes. They summer in China and Russia, wintering in Japan and Korea. In China, they are protected as the national bird. But cranes throughout Asia are still at risk from disappearing wetlands and climate change. China’s Zhalong Nature Reserve on the Wuyue River near Qiqihar, also called “Crane Village,” is the world’s largest captive breeding center of these precious cranes. This wildlife sanctuary delights and draws international nature lovers. It has raised and successfully released three hundred birds back into the skies, restoring the wild population to twenty-seven hundred cranes.

Japan’s Indigenous people, the Ainu, have long performed the red-crowned crane dance in their traditional ceremonies, honoring these ancient birds as divine beings of the marshes. In the 1950s, a Japanese dairy farmer, Yoshitaka Ito, realized that his region had only one surviving pair of these cranes. He devoted his life to feeding and encouraging these majestic birds to breed safely on his land. The Wild Bird Society of Japan continues Ito’s conservation in the Tsurui-Ito Tancho Sanctuary. The cranes need these restored wetlands to survive. Wild bird sanctuaries “promote a deeper understanding between people and cranes,” says Chief Ranger Osamu Harada.

Because of conservation efforts and local hand-feeding, red-crowned cranes have been moved from “endangered” to “vulnerable.” The hope is that these cranes will again thrive on their own—for another thousand years.

We created Crane Maiden during the pandemic, when Ed Young and I, along with millions of others, lost people we dearly love. For Ed, it was his tai chi colleague, Carol Yamasaki, with whom he’s enjoyed sixty years of subtle changes; for me, my Russian musical mentor, Dianochka Shvets. As Ed was playing with shadows in his collage art of paper and feathers, my crane dreams returned to haunt my midnights. We found solace in these sacred cranes and hope this story comforts all ages, keeps memories alive of those we have lost, but may find again in another world—even another form. 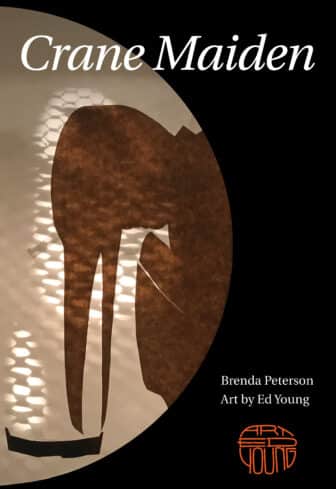 Crane Maiden is a love story symbolized by the cranes of Asia on the human soul. It is told totally in shadow play. The illustrated book, is published by Chin Music Press. It is also on display as an animated exhibit in the Eric Carle Museum in Amherst, Massachusetts, from June 25 to December 31, 2022.

Taoism is an ancient philosophy of nature, simplicity, and humor. The dualism of Chinese Taoism calls us to attend to opposites, like two faces of the same coin—light and dark, parting and reunion, gravity and flight. Yin and yang complete each other, cannot exist separately, enrich and fulfill the other. Their “interplay of energy makes harmony,” writes Lao Tzu in his classic Tao Te Ching. Just as in physics, the positive and negative magnetic fields synthesize and work as a whole.

In China, cranes are symbolic creatures of nature. They bring good fortune and rain to crops and wetlands, as well as flood and destruction. Good and evil coexist in this Taoist balancing act. The West perceives truth as static perfection, but Chinese philosophy embraces polarities, always in a state of change, always alive. So red-crowned cranes embody both extremes, like the cosmos, or a vessel that can be perceived as half empty or half full.

How will we choose to live, to dance?

For more on cranes:

Ed Young has illustrated more than a hundred books for children. A graduate of the Art Center College of Design in Pasadena, Young has taught at the Pratt Institute, Yale University, Naropa University, and the University of California at Santa Cruz. In 1990, his book Lon Po Po was awarded the Caldecott Medal. He has also received two Caldecott honors—for The Emperor and the Kite and Seven Blind Mice—and was twice nominated for the Hans Christian Andersen Award, the highest international recognition given to children’s book authors and illustrators who have made a lasting contribution to children’s literature. In 2020, Young received the Chen Bochui International Children’s Literature Author of the Year Award, and a new museum of children’s literature is opening in China featuring his art. Young lives in Westchester County, New York.

Brenda Peterson is the author of more than twenty-three books of fiction and nonfiction for adults and children, rooted in nature and animals. Her children’s books include Leopard & Silkie: One Boy’s Quest to Save Seal Pups (a finalist for the Beverly Cleary Award, and a selection by Scholastic Book Fair and National Science Teaching Association), Lobos: A Wolf Family Returns to the Wild (finalist Green Earth Book Award), Wild Orca: The Oldest, Wisest Whale in the World (Junior Library Guild Gold Standard Award), and Catastrophe by the Sea with Ed Young. Her recent adult book Wolf Nation: The Life, Death, and Return of Wild American Wolves, was named a “Best Conservation Book of the Year” by Forbes magazine. Peterson’s work has appeared on NPR and in the New York Times, Christian Science Monitor, Chicago Tribune, Seattle Times, and Oprah magazine.