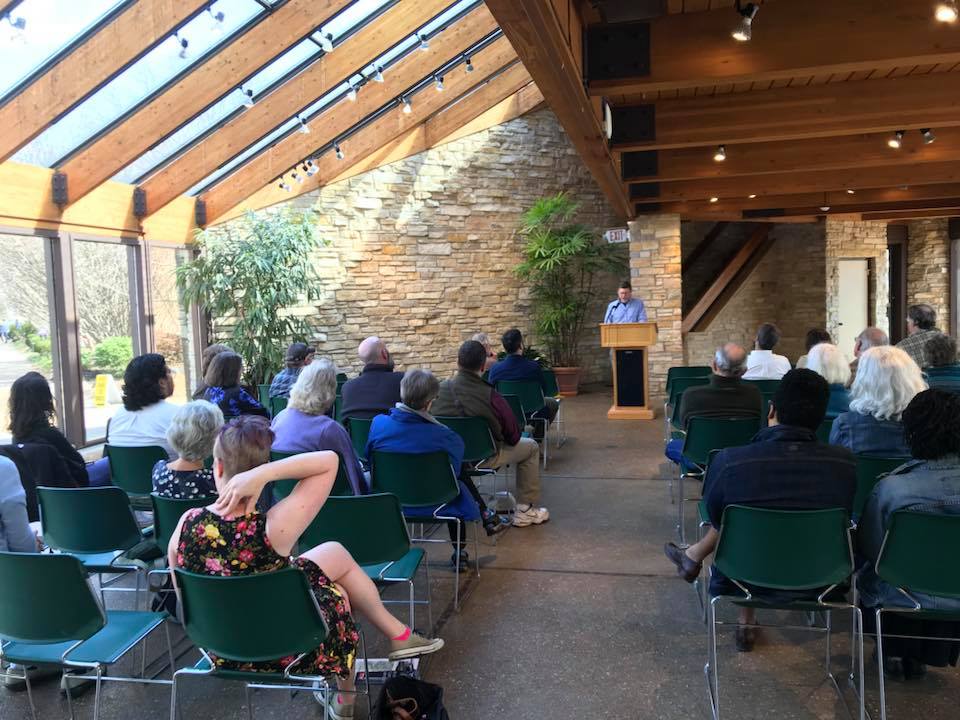 To honor Earth Day this year, Black Earth Institute partnered with Arts + Literature Laboratory to hold a special reading at Olbrich Gardens in Madison, Wisconsin. BEI spotlighted local writers who use their collective voices to create poetry and prose, which advocates for an environmental cause: opposing the Cardinal Hickory Creek transmission line and defending the Driftless Area of Wisconsin. Between powerful essays and stories about the intersection of place and identity, BEI’s co-founder, Dr. Michael McDermott introduced the threat of the proposed Cardinal Hickory Creek 345 KV transmission line. He read two poems by other co-founder and late wife, Patricia Monaghan, calling on us to be guided by voices of Indigenous people’s stories. Catherine Young is a geographer, farmer, and writer who lives near Blue River, Wisconsin. She engaged the audience in song and dance that celebrated the earth and nature over technology and disconnectedness.

Chuck Tennessen chairs Sustain Iowa County, a volunteer group that opposes Cardinal-Hickory Creek and promotes sustainable practices. He read an expanded version of his essay, which is inspired by classical tale of David and Goliath. It championed how if many small grassroots organizations work together, they can take on and drive out giant corporations. Read Davey’s Alphabet Soup from “Earthbound” column in Iowa County’s leading news weekly. Kevin Koch teaches Creative Nonfiction in the English Department at Loras College.  He described the potential dangers of the transmission line and gave the audience a concrete idea of how this project will harm the earth and local environment.

Michael Malone, a writer based near Chicago, IL who fell in love with Wisconsin as a youth, finished the campaign by rousing the crowd with three animated and motivating poems; thereby solidifying the importance of momentum in fighting against the Hickory Creek Transmission Line.

A massive thanks to everyone who attended the reading, the artists who stood up to make their voices heard, Arts + Lit Lab for their hard organizational work, and Olbrich Gardens for a beautiful venue.