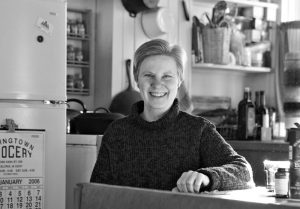 Mary Swander is the Artistic Director of Swander Woman Productions, a theatre troupe that performs dramas about food, farming, and the wider rural environment. She is also the Executive Director of AgArts, a nonprofit designed to imagine and promote healthy food systems through the arts. Her latest book is a collection of essays on her interactions with her Amish neighbors, called Adeste Fideles in Chinese, from Route 3 Press.

The former Poet Laureate of Iowa, Swander is an award-winning author who has been given grants from the National Endowment for the Arts to the Whiting Foundation. She has published scores of books of poetry and nonfiction as well as essays, magazine articles, individual poems and radio commentaries in such places as National Public Radio, The Nation, The New York Times Magazine, and Poetry Magazine. She is best known for her poetry book Driving the Body Back and for her memoirs Out of this World and The Desert Pilgrim.

Currently, Swander is performing her dramas from coast-to-coast in venues that include farmers’ barns to New York University, The Federal Reserve Bank of Chicago, The Mayo Clinic, and the Idaho Wine Commission. Her touring productions are: The Girls on the Roof, an adaptation of her poetry book with the Eulenspiegel Puppet Theatre; Vang, a play about recent immigrant farmers; Map of my Kingdom, a play about farmland transition; and Farm-to-Fork Tales, a storytelling performance.

Mary Swander also gives solo performances of her own work, playing the banjo, the harmonica and the spoons. She has dual U.S./Irish citizenship and teaches in Ireland in the summers. The rest of the year, she lives in an old Amish one-room schoolhouse, raises goats and has a large organic garden where she grows most of her own food.