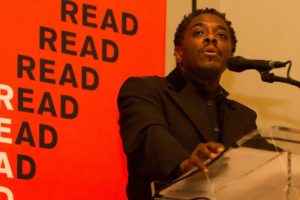 Whether it’s as a performer at any of the city’s numerous poetry readings, or as a teacher of poetry at local classes and writing programs, Boston-based poet Regie Gibson is a familiar face to Worcester poetry audiences. And with good reason: He’s a sharp, dynamic performer and an exciting, daring and evocative writer, with work ranging from the intensely personal to recasting the works of Shakespeare as gangster rap. He’s a wildly inventive poet, and his shows are electrifying.

If you’ve never caught him, or want to see him again, you’ll have an opportunity at 6 p.m. Feb. 13 at Bedlam Book Cafe in Crompton Place, 138 Green St., Worcester. The event is free.

Gibson is a National Poetry Slam Champion, and his work has appeared in the movie “love jones,” on HBO’s “Def Poetry Jam” and NPR programs such as “On Point” and “Radio Boston.” He is a Emeritus Fellow of the Black Earth Institute and has received the Walker Scholarship for Poetry from the Provincetown Fine Arts Work Center, a Mass. Cultural Council Award, the Lexington Education Foundation Grant for poetry, a YMCA Writer’s Fellowship & the Brother Thomas Fellowship from The Boston Foundation. He’s served as a consultant for both the National Endowment for the Arts “How Art Works” initiative and the “Mere Distinction of Color,” an exhibit at James Madison’s Montpelier examining the legacy of slavery and the U.S. Constitution. His work has been published in Poetry Magazine, Harvard’s Divinity Magazine and The Iowa Review, among others. His volume of poems, “Storms Beneath the Skin,” has received the Golden Pen Award.