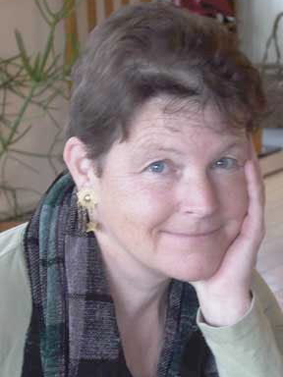 “Onsite research: Listening to the Land”

Novelist Elizabeth Cunningham will share how her encounters with place shaped The Maeve Chronicles, a series of award-winning novels featuring a feisty Celtic Magdalen. During her twenty years of research and writing, Elizabeth traveled to the Hebrides, Wales, Italy, Israel, France, Turkey, and England. Over and over, she discovered that the land itself has stories to tell to those who will listen: “Deserts are as real as gardens. When I returned home from these pilgrimages and continued to write, my vision was enlivened by the deserts, pavements, gardens, and lakes, mountains, and brothels my Magdalen might have seen with her own eyes.”

In her essay In Search of Real Gardens: A Novelist’s Onsite Research (2012) she recounts this insight rom her travels to Jerusalem: The Anglicans have a rival theory about the site of the crucifixion and locate it outside the medieval walls of the old city. They have a rival tomb also, a real one that dates to the 1st century and is big enough to have housed a small family. Outside it is a real garden where one can imagine Jesus pruning the trees on Resurrection morning, waiting for Mary Magdalen to recognize him. Because it was outdoors and less crowded—or maybe because of all my Anglican ancestors—this site held more appeal than the traditional one. On the Mount of Olives I felt closest to the story. I sat among the lap-like roots of a huge olive tree so old it might have been young when Jesus—and Maeve—walked back and forth between Jerusalem and Bethany.

The author of nine novels and four collections of poems, Elizabeth Cunningham lives in New York State in the valley of the Mahicantuck (the river that flows both ways).  In addition to the four novels of the Maeve Chronicles, she has written The Return of the Goddess, a Divine Comedy, and  All the Perils of This Night,  a “smart and twisted literary thriller.” Her most recent volume of poetry is Tell Me the Story Again. For more about Elizabeth, please visit her website.  (You can also find both Elizabeth Cunningham and Maeve Rhuad on FaceBook.)

Elizabeth Cunningham is a fellow emeritus of Black Earth Institute (BEI). Founded by ASWM co-creator, the late Patricia Monaghan, with Michael McDermott, BEI is a community of artist-fellows and scholar-advisers creating a more ethical world. BEI seeks to help create a more just and deeply interconnected world and promote the health of the planet. To do so, artists are appointed as Fellows for a term and Scholars join as advisors. BEI then encourages and supports its present and past Fellows and Scholars to address social justice, environmental issues and the spiritual dimensions of the human condition in their art and work. Their beautiful About Place Journal has featured the work of hundreds of artists. Michael is a longtime member of ASWM’s Advisory Board, as BEI cooperates with ASWM to expand our reach to scholars and to develop special programs.

Save the dates for upcoming ASWM Salons:

The Salon recording will also be available to members after the event.

Register for Event: “Onsite research: Listening to the Land” with Elizabeth Cunningham