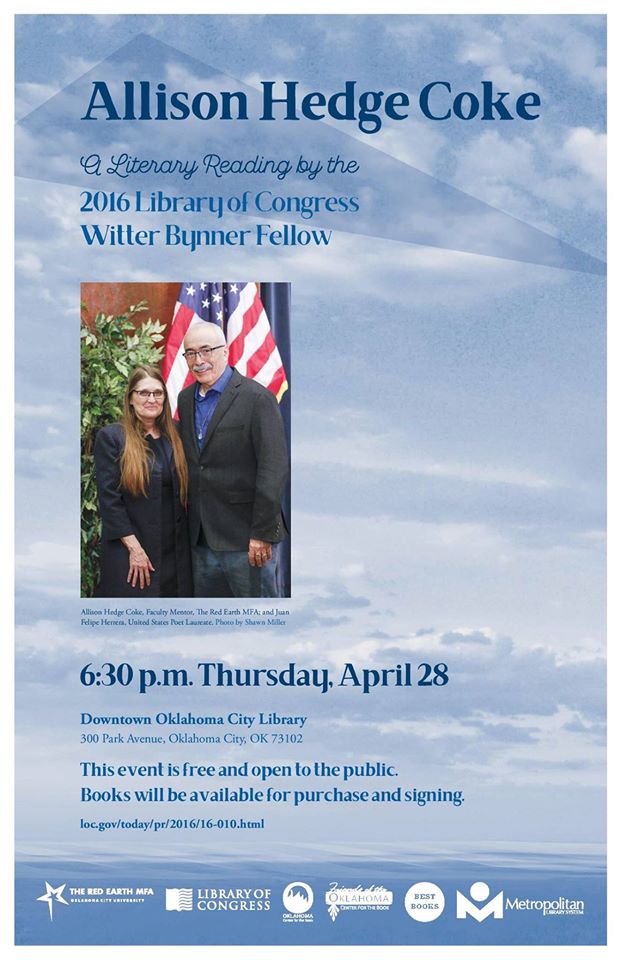 The 21st Poet Laureate Consultant in Poetry at the Library of Congress, Juan Felipe Herrera, has selected poet Allison Hedge Coke for the 2016 Witter Bynner Fellowship. In his selection, Herrera said he sought to honor Hedge Coke “for her precision of Earth, of suffering in and out of the Rez, of the workers unnamed, open roads knitted with tin shacks, Case ’45 tractors, ancestor dust and the spirit tuned to caribou, America and song. For her translation projects of First Peoples across the entire hemisphere. For her unceasing teaching, humility, courage, and pioneering—for these offerings to the small miracles of all our voices and the galaxies they aim to call out and admire.”

Her honors include an American Book Award, an Independent Publisher Book Award, and a Lifetime Achievement Award from Native Writers’ Circle of the Americas. She has won fellowships from the National Endowment for the Humanities, the Lannan Foundation, and the MacDowell Colony for the Arts. Hedge Coke is the editor of eight poetry collections, one titled “Sing: Poetry From the Indigenous Americas” (2011) was named a Best Book of 2011 by the National Books Critics Circle’s Critical Mass. Hedge Coke is a founding faculty member of the Vermont College of Fine Arts’ full-residency MFA in Writing and Publishing Program, where she teaches poetry, creative nonfiction and publishing.